An expansion pack for Railroad Ink series, the critically acclaimed roll and write games where you draw routes on your board trying to connect the exits at its edges. The Engineer Expansion Pack contains 4 expansions: Renovation, Special, Construction, and Separation! 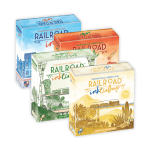 In the multiplayer puzzle game Railroad Ink™, your goal is to connect as many exits on your board as possible.
Each round, a set of dice is rolled in the middle of the table, determining which kind of road and railway routes are available to all players.

Use the special dice of the Arcade Expansion in addition to your regular Route dice and find new ways to score points! Feed Pluck-Man with enough Fruits to eat those pesky Ghost in the Pluck-Man Expansion! Respect your commitment for urban planning to gain precious points with the Tetromino Expansion! Send Aliens to attack your opponents while trying to defend against those invading you with the Galactic Invaders Expansion! Populate your board with colorful rainbows and send ominous clouds to your adversaries in the Rainbow Expansion! 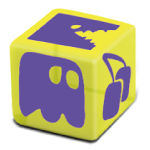 With the Pluck-Man Expansion, each round you will be asked to link one of your Exits to either a Ghost, a Fruit, or Pluck-Man (by drawing the corresponding symbol next to that Exit). At the end of the game, the more Ghost Exits are linked to the same network of a Pluck-Man Exit, the more bonus points you will score… as long as a Fruit Exit is also linked to that same network, to feed Pluck-Man with the energy needed to catch all those pesky ghosts! If no Fruit Exit is linked to that network, each ghost will subtract from your final score instead! 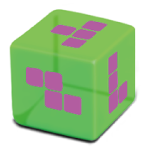 The Tetromino Expansion will allow you to “reserve” 4 adjacent empty spaces in the shape of the tetromino shown on the die by marking them with a small square in a corner. In later rounds, as you fill more and more spaces on your board, finding empty zones with the correct shape to be able to reserve more spaces will become more and more difficult, of course. Reserving spaces in advance is sort of a bet: if you’ll really build something in a space that you reserved like this before the end of the game, you’ll earn extra points for each of these reserved-and-then-filled spaces. But you will lose points for each reserved space that you left empty at the end of the game, so don’t be too greedy and plan carefully! 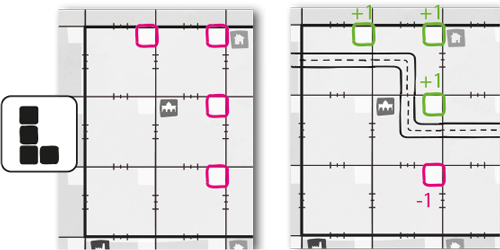 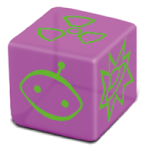 While using the Galactic Invaders Expansion, at the beginning of the game each player will draw 2 Aliens in 2 separate spaces of the board of the player to their right (Aliens are drawn in a corner of the space, they don’t take the full space); during the game, you will be able to remove an Alien from your board simply by drawing a route in its space.

There’s a catch, though: whenever an Alien face appears on the die, each player can draw an additional Alien in an empty space (always on the board of the player to their right) AND each Alien that was already drawn builds a shield around itself (making it impossible to remove by drawing a route in its space).

Shield can be destroyed, though. When the Nuke face appears, you can remove 1 Alien from your board (whether it had a shield or not).

The final special face of this Expansion is the Attack face; when it appears, if you have a space which contains a Route and a (shielded) Alien, the Alien will destroy that Route.

To make things worse, at the end of the game you will lose points for each Alien left on your board, so try to get rid of all of them! 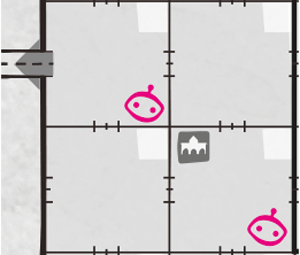 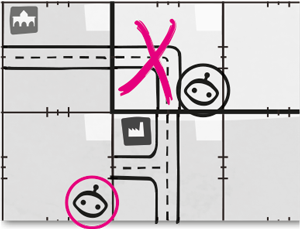 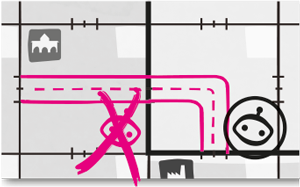 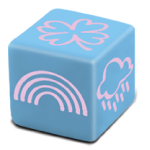 The Rainbow Expansion is sort of inspired by one of our previous games, Unicorn Fever. You roll this die in addition to the regular route dice; drawing the result of this die is mandatory, and the game only lasts 6 rounds instead of 7 when you play with the Rainbow Expansion. Also, at the beginning of the game, you start with a rainbow already drawn in the space at the very center of your board (like in the Lava expansion from the Blazing Red Edition of the classic Railroad Ink).

When a Rainbow face appears, you must draw a new rainbow in an empty space on your board (and note that you can’t draw a rainbow orthogonally adjacent to another rainbow). At the end of the game, all networks connected to the same rainbow are “magically” connected to each other as well (the rainbows act as a sort of “wild route”), but rainbows interrupt your longest highway/railway (so they don’t count towards that, only towards network connections).

When the Rain Cloud face appears, you must draw a cloud on the board of the player to your right in an empty space orthogonally adjacent to an existing rainbow. Only if that is not possible, you will be allowed to draw a Rain Cloud in any empty space of your opponent’s board. Clouds can then be removed by drawing another rainbow on top of them (if it’s a legal move, of course: if it’s not, the Cloud will block that space for the rest of the game).

Finally, when the Clover face appears, you must draw a Clover on an empty space of your board. At the end of the game, if a Clover is orthogonally adjacent to a Rainbow, it will be worth bonus points.

You will need to balance your strategy between using the Rainbows as a “wild route” to connect networks together and placing Clovers next to them to score bonus points, while also trying to use the Rain Clouds on the boards of your “right opponent” to damage their own strategy and remove those placed on your board by your “left opponent”. 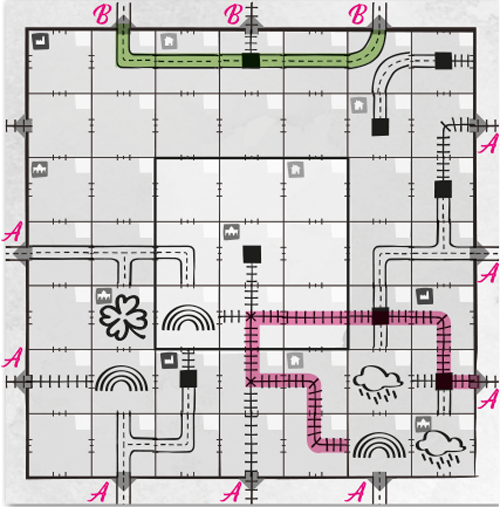